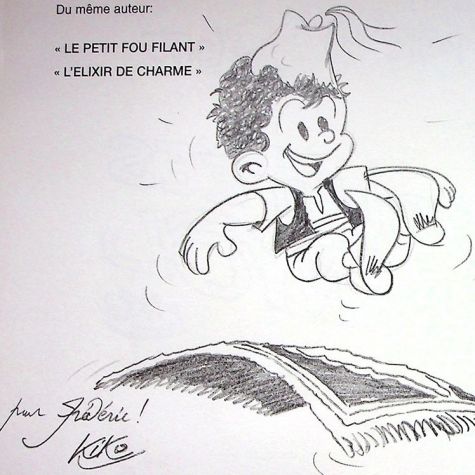 Dedication on the inside page

Accompanied by his ex-libris

Ah the 1001 nights ofKIKO, its sense of the picturesque, its sweet humor and its scavenging inventions. The good guyFuckand his flying carpet made the beautiful days of the Journal of Spirou, trustedabout ten blankets(a certainty of popularity), but only two albums appeared at home Dupuis In 1968, the more true it is 3 beautiful books in the Carrousel Collection. And an album later at MC Productions ... and finally 3 albums at Point Image.

Magy of the East, nice protective mage of Foufi, wicked mage and his stupid servant, one or two sultans, ... and if many stories happen in the desert or an oasis, KIKO also excels in making the scenes of market, of Arabian cities, as nobody. Large boxes or double pages are a feast of humorous details. Always with a drawing well to him, in the tradition of BD humour franco-belge but with his paw well to him.

This volume A4 takes back ten short stories, games with Foufi and some beautiful large drawings full page.
Format A4, 48 black and white pages, embroidered, Editions Point Image 2000 . The small color thumbnail on the title page may vary.

No customer reviews for the moment.